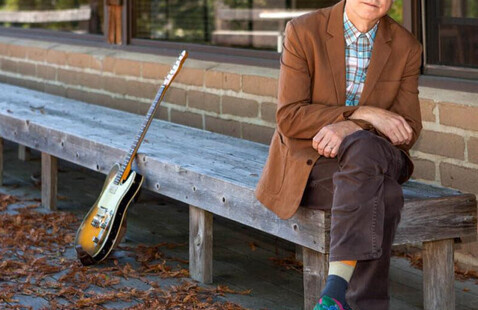 Wolfe Center for the Arts, Thomas B. and Kathleen M. Donnell Theatre View map $8, no charge for BGSU students with ID card
Add to calendar
Save to Google Calendar Save to iCal Save to Outlook

As part of the Orchard Guitar Festival, guitarist Bill Frisell will give a solo performance. Tickets for this performance can be purchased here.

Described as being "at the very epicenter of modern American Music" (BBC), Bill Frisell's career as a guitarist and composer has spanned more than 35 years and 250 recordings, including 40 of his own. Frisell's recording catalog has been cited by Downbeat as "the best recorded output of the decade," including his recent albums for Savoy -- Sign of Life with the 858 Quartet, Beautiful Dreamers with his trio, and All We Are Saying, a new collection of John Lennon interpretations. Read more about Bill's music and career on his website.

Selections will be announced from the stage.

$8, no charge for BGSU students with ID card