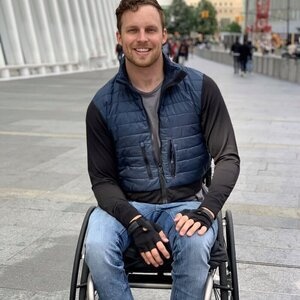 Carson Tueller was raised in a military family along with his five siblings, moving from state to state across the U.S. every three years. He eventually established long term residence in Utah, where he attended college before moving to New York City.

Carson’s whole life took an unexpected turn in 2013, which is the year in which he came out as a gay man, and also injured his spinal cord in an accident that broke his neck, paralyzing him from the chest down. Nearly everything about his life shifted, causing the  identity crisis which would act as the impetus for self-discovery and exploration.

Shortly after his spinal cord injury, Carson began sharing his experiences as a gay disabled man, including his journey with grief, loss and worth. He quickly generated interested online and gained visibility on Instagram as an LGBTQ+/disability advocate.

He became actively engaged in the LGBTQ+ community as a vocal advocate and leader, and became the president of the  LGBTQ+ nonprofit organization, Affirmation, where he delivered keynotes and training to international leaders on topics like worth, inclusion, and suicide prevention.

He also began speaking across the U.S. to universities, corporations, and nonprofits about how individuals can experience power, happiness and fulfillment in any circumstance in life. As part of his journey, Carson also immersed himself in transformational education, earning a B.S. in psychology, and receiving extensive training in ontological coaching methods.

Carson is passionate about giving people hope. He is committed to changing our shared social narrative around worth, giving people a new sense of who they are and what they can accomplish. He believes that the results that people produce, whether in the workplace, in their relationships, or in any other area of life, are greatly impacted by their sense of personal worth. Carson’s methodology for transformation is rooted in the philosophy that our lives are lived inside of the narratives we created about ourselves, our circumstances, and our experiences. He believes that consciously creating our personal narratives can result in massive changes in our quality of life and the results we produce.

Carson continues to speak, write and coach, and most recently finished working on a 2020 presidential campaign as a policy advisor. He resides in NYC.

Carson will be delivering his keynote, Redefining What it Means to Have a Human Body

This event is FREE and OPEN to the public, RSVP HERE to secure your ticket.