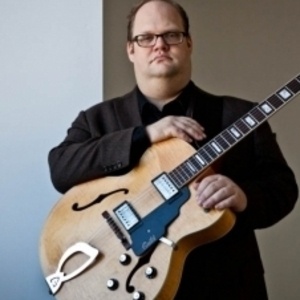 How to Release and Promote Your Own Recording Without a Record Label: Brad Myers

As part of the 2019 Orchard Guitar Festival, guitarist Brad Myers will present a clinic. This event is free and open to the public. Brad's session is titled "How to Release and Promote Your Own Recording Without a Record Label."

Playing music since the age of 6, the remarkable composer/guitarist Brad Myersdecided to pursue transcendence through jazz expression at the age of 13. And that purity of spirit and joy of creativity has been at the core of his artistry throughout his musical life. After more than 20 years as a much sought after sideman and co-directing a variety of acclaimed ensembles that crossed the boundaries of multiple musical genres, Brad has decided to emerge as a leader. The 2015 release of Prime Numbers, the first album released on his own label, Colloquy Records, is a stunning showcase for his brilliant talents as both composer and guitarist. Prime Numbers earned worldwide praise from critics and jazz radio alike, including “4 Stars” from Downbeat Magazine and rotation on PRI's Jazz After Hours program. In 2017, Brad and Colloquy have released Sanguinaria (Hopefulsongs), a breathtaking and uplifting collaboration with bassist Michael Sharfe that focuses on the beautiful dialogue and interplay between jazz guitar and double bass in both duo and trio settings.