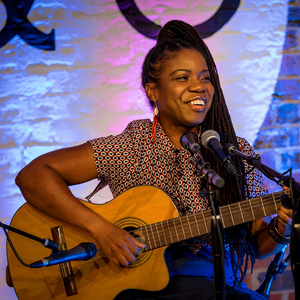 The story of soul-funk-rock singer Chaquis Maliq begins as many musical stories do: With the protagonist picking up a guitar. She quickly became adept at a jazzy, unpredictable style on the six-string acoustic, using it to accompany her ecstatic, elastic vocals and working in some pounding foot-percussion to accompany herself. That’s where her “EccentroSoul 1 Woman Band” concept was born, as Maliq cultivated a solo sound that feels more like a tight-but-loose ensemble than one performer. Since coming up with that winning setup back in 2014, Maliq has proven to be a surprisingly flexible performer. Her 2018 single “You Can’t” is a study in minimalism, with a wild, fiery vocal, probing bursts of acoustic guitar, and a foot-stomp rhythm. But if you go back to her 2016 full-length album, Resilience Eludes Death, you’ll hear a fuller version of Maliq’s sound that brings in salty electric guitars, buoyant bass lines, and thicker percussion, with her acoustic-guitar-and-vocals nucleus still intact. That style has earned Maliq various kudos and opportunities, including a 2016 City Paper Music Award nomination for Soul/R&B Act of the Year, a 2012 RAW Artist Baltimore Musician of the Year nomination, slots on various festival bills around the country, and an opening slot with NPR Music’s Best of Tiny Desk-winning neo-soul outfit Tank & the Bangas. Maliq calls what she does in her one-woman performances “Eccentric tasteful grooves and honey soul,” and it’s difficult to think of a more apt description. Regardless of the labels, it’s a compelling synthesis of direct, mysterious, folksy, and full-on soulful.