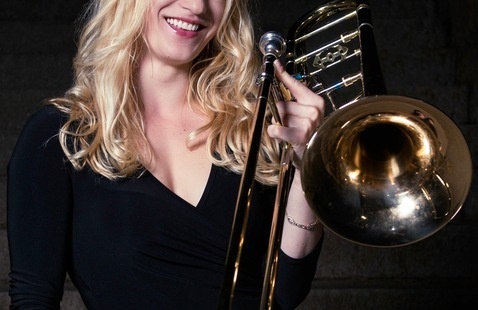 Professor of Trombone Brittany Lasch will present a recital in our Faculty Artist Series. This event is virtual and will be live streamed:

"A Celebration of Women's History Month"

When Andrew Malloy commissioned me to compose a work for trombone, I was both thrilled and terrified to write a work for this marvelous musician and remarkable instrument as, although I have written for the big instrument in my orchestral works, it seemed more daunting to write for an instrument that is not necessarily thought of as a “solo” instrument (at least to other than brass players!). So, with Andy’s help, and it is always wonderful when a composer has the luxury of collaborating with a great player, I learned about the different sonorities, positions, and challenges of this instrument. “Wind Tides” for trombone and piano can be likened to a mini-concerto in a single movement with a fairly lengthy cadenza and is basically in ABA form. The title comes from the obvious reference to the breath required for this instrument and from the ebb and flow of the music.
~Adrienne Albert

Of French nationality, Ida Gotkovsky grew up in a family of musicians. Her studies at the Conservatoire National Supérieur de Musique in Paris won her numerous first prizes. Ida Gotkovsky is known for a broad range of works, amongst which chamber music, symphonic works, instrumental, vocal and lyric pieces are widely represented.

Her fame quickly spread, and Ida Gotkovsky was asked first to join, later to preside over, numerous international juries. Meantime, her works were being performed in Europe, the United States, the U.S.S.R, Japon, Asia, Australia ... She was named Professor of Composition in Texas. AIl her works are commissioned by the State or by foreign countries.

Program Notes on A Caged Bird

Scored for trombone (or euphonium) and piano, this piece was not written specifically in response to either the poem by Maya Angelou or that by Paul Dunbar that both refer to “the caged bird”. However, there is no doubt that both poems have inspired my own further exploration and now musical extrapolation on the subject of being “caged” and of still “singing”in spite of this. With all due respect and admiration for Ms. Angelou and Mr. Dunbar, I have attempted here in my own  concept of “cagedness” to include, beyond  racial references, also those issues that include gender, sexuality, economic status, medical/physical problems and any number of other situations that create restrictive and even imprisoning boundaries from which we and all others struggle to break free and find fully human, creative and even spiritual expression within ourselves. Even within the many bonds and restrictive boundaries that we often find ourselves, it still seems to be a fundamental part of our Nature as both human and Spiritual beings that we cannot help but “sing” in both joy and praise both from ourselves and to our own Creator despite the sometimes, even apparently insurmountable obstacles we encounter. For me, this piece is not so much an exploration as to “why the caged bird sings” as it is simply a commenting, even with some measure of wonderment, on its remarkable inevitability.
~Barbara York, 2014

Barbara York has been working in both Canada and the U.S. for over 40 years as a concert accompanist, choral and theatrical music director and composer. Her score and lyrics for the Canadian musical Colette won a Dora Mavor Moore Award (Canada’s version of a Tony) in 1981. She has received commissions from two Canadian symphony orchestras (Mississauga and Saskatoon), the Boise State University Symphonic Winds and the Boise State Symphony Orchestra, plus numerous private groups and soloists in both the US and Canada.

She has presented compositions at three World Saxophone Congresses and at the 2003 International Double Reed Symposium. Her 50-minute scripted, children’s piece, A Butterfly in Time was nominated for a Canadian “Juno Award” for recordings in 2006 and is available through Amazon.com and elsewhere under the Children’s Group label.Conversations, for Euphonium, Alto Saxophone and Piano, won the Harvey Phillips Award for Euphonium in Chamber Music at the 2006 International Tuba Euphonium Congress and has been recorded by Adam Frey, its commissioner.

Her Concerto for Tuba and Orchestra was recorded by Tim Buzbee with the Iceland Symphony Orchestra and is available internationally through Albany Records. Other recent recordings of her pieces include Saxspectrum by Glen Gillis, Thoughts of a Cow by Scott Watson and recordings by tubists Matt Brown, Deanna Swaboda and Stephanie Frye.

Several of her compositions have been on National and International competition lists and are on the Contest lists of several States as well as being available in recordings through Amazon.com, CDBaby and Itunes.

Commissioned by the celebrated trombonist Natalie Mannix, Two Latin Dances is a beautifully evocative and sizzling work based on Bossa Nova and Tango rhythms. While at first sounding as two distinct movements, the characteristic dances gradually intertwine to create a uniquely integrated and ever-building whole. Natalie Mannix introduced Two Latin Dances at the 2016 International Trombone Festival and has recorded the work on her CD Breaking Ground: A Celebration of Women Composers.

Composer Lauren Bernofsky's catalog includes solo, chamber and choral music as well as larger-scale works for orchestra, film, musical, opera, and ballet. Her music has been performed across the United States, Europe, and Asia, as well as in Australia, New Zealand, Greece, Iceland, Kenya, and South Africa.

Inspired by the expressive potential of each instrument, her distinctive language speaks both to musical history and the present day. The artistry of her orchestration grew out of her doctoral studies with master composer Lukas Foss. She holds degrees from the Hartt School, New England Conservatory, and Boston University. Her philosophy of composition is simple: music should be a joy both to play and to hear.

Her works have been commissioned by the Harford Ballet, the Bloomington Symphony Orchestra, the Delmar Trio, Jeffrey Curnow (Philadelphia Orchestra), and many others. Winner of the National Flute Association's Newly Published Music Competition for her Sonatine, her earlier awards include the Contempo Festival OPERA PUPPETS Mainstage Award and grants from the American Music Center, American Composers Forum, and National Foundation for the Advancement of the Arts. Her trumpet concerto is frequently performed as audition and recital repertoire both in the United States and abroad.

Lauren Bernofsky's works can be heard on the Polarfonia, Albany, Music to My Ears, Blue Griffin, MSR Classics, and Emeritus labels.