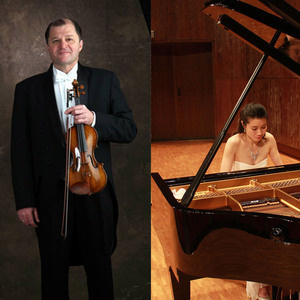 About the Guest Artists

A recipient of the prestigious Yehudi Menuhin Award, violinist Borivoj Martinic-Jercic has enjoyed an illustrious career.

Born in Zagreb, Croatia (1960), he was raised in a family of musicians and scientists and began violin lessons at the age of five.  In 1978 he graduated from the Blagoje Bersa Conservatory of Music where he studied with Kristijan Petrović. As a teenager he visited relatives in Ottawa, Ontario, where he began summer lessons with Armand Weisbord. In 1977 Boro attended the Interlochen Summer Music Camp, where he won a full tuition scholarship to the University of Michigan.  In 1982 he earned his Bachelor Degree in Violin Performance under the guidance or Prof. Paul Makanowitzky, and in 1984 Boro earned his Master Degree in Violin Performance under the guidance of Prof. Ruggiero Ricci. After graduating in 1984 Boro performed with such prestigious ensembles as Orpheus Chamber Orchestra and Detroit Contemporary Chamber Ensemble.

Huang has been a prizewinner in several international piano competitions, including the USASU International Piano Competition in Tempe, Arizona, the 57th Wideman Piano Concerto Competition in Shreveport, Louisiana, and the International Chopin Piano Competition in Taipei, Taiwan. She regularly performs over fifty solo and chamber recitals every year in Europe, States, Canada and Taiwan. She has been invited to summer festivals including the 2006 Aspen Music Festival, the 2007 Pianofest in the East Hamptons, the 2008 Orford Music Festival, Quebec, the 2010 Atlantic Music Festival in Maine, the 2012 CICA Eureka Springs International Music Festival in Arkansas, and the 2012 and 2013 Banff Music Festival, Alberta. Festivals increasingly ask for her presence on their artist rosters. Recently, Huang also was presented in a piano recital in National Taiwan Concert Hall (Taipei), as a result of being nominated for the prize of “Excellent Musician Series” by ProArtist. She also gave a sold-out concert (Chamber Label Management) in 2017 at National Taiwan Concert Hall and TaiChung Opera House.