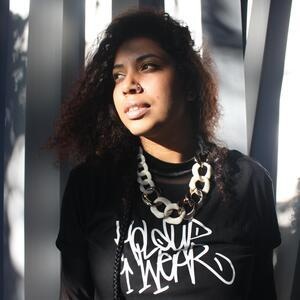 Guest artist Medusa will be on campus to give a Q&A session on Tunisian hip hop. This session will be in the Choral Rehearsal Hall, and is open to the public.

Medusa is an MC from Nabeul, Tunisia. She is a vital member of the Tunisian hip hop scene and international Arab scene. As a B-girl since the age of ten who began singing at age sixteen, Medusa was struggled to identify her voice early in her career. Now she regularly performs in large international festivals where she sings about the ambitions and dreams of Tunisian, Arab, Muslim, and African women who are pushing back against obscurantism and discrimination.

Following her first release—a 2009 R&B love song written in English called “Hey Baby”—Medusa moved toward Arabic and French hip hop with songs like 2010’s “Fille de bonne famille” [Good Family Girl] and “Nouvelle Vibe” [New Vibe]. She soon became the only female MC known in her country and one of the few to find success from across North Africa.

During 2011’s revolution in Tunisia, a political uprising that sparked the Arab Spring, Medusa continued releasing music that spoke for all of the women that she represents. While the strength of this poor country had captured the world’s attention, and because of her ability to share songs in different languages, Medusa found opportunities to be a part of several international projects. These led to some of her most well-known recent music, including the 2011 single “Tounisya fière de l’être” [Proud to be a Tunisian woman]. With this success, Medusa has been invited to several countries where she has realized that her voice represented more than just her Tunisian background: she could demand recognition for woman across the Arab world and the globe.