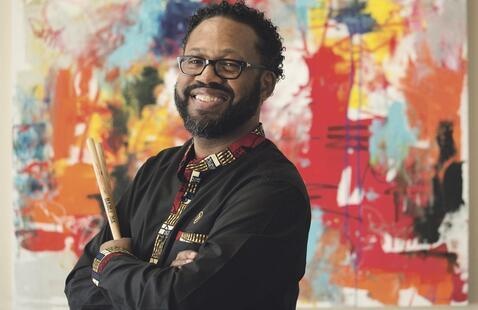 Moore Musical Arts Center, Kobacker Hall View map
Add to calendar
Save to Google Calendar Save to iCal Save to Outlook

TICKETS ARE SOLD OUT!!

This event will be live streamed.

Dr. Mark Lomax, II, is a critically acclaimed composer, recording artist, drummer, activist, and educator. A highly sought-after lecturer, Lomax specializes in the socio-political, and spiritual aspects of African-American art music, race, and using the arts to build community. Lomax released 400: An Afrikan Epic in January 2019, telling the story of the Afrikan diaspora through music. Divided into thirds, the Epic explores thousands of years of the history that is pre-colonial Afrika, the Ma’afa (400 years between 1619 and 2019), and Afro-futurism expressing a vision of what Blacks in America will heal toward in the next 400 years. Lomax also calls 400: An Afrikan Epic, an opportunity to celebrate the resilience, brilliance, strength, genius, and creativity of a people who continue to endure while offering a transformative view of the future.