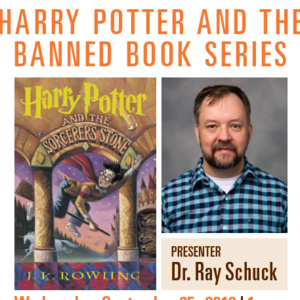 J. K. Rowling’s Harry Potter series, consisting of seven books released between 1997 and 2007, has been one of the most prominent and successful popular culture phenomena of the past two decades. In addition to the books themselves, the series has spawned, among other things, film adaptations, a plethora of related merchandise, a theme park, and multitudes of fan texts. The series also has the distinction of being one of the most banned books of all time, including, according to the American Library Association, ranking as the most banned book or set of books for the decade of 2000-2009.
In this presentation, Dr. Ray Schuck will discuss reasons why the Harry Potter books were banned and responses the bans have elicited from fans and readers of the series. The presentation seeks to provide context for understanding why Harry Potter has been banned and the cultural contexts within which those bans have occurred.
About the presenter
An alumnus of the Popular Culture program at Bowling Green State University, Dr. Ray Schuck also holds a Master’s degree in American Studies from Michigan State University and a Ph.D. in Communication from Arizona State University. His professional work focuses on the intersections of culture and communication, most specifically in critical and rhetorical analysis of various forms of popular culture.

This lecture is part of Banned Books Week. Banned Books week is an annual event celebrating
the freedom to read. It highlights the value of free and open access to information.