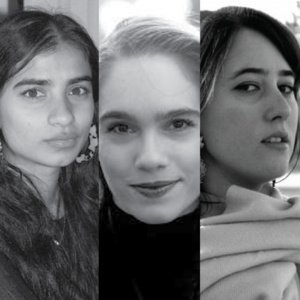 Choosing to Challenge: Works and Conversation on Creating a More Gender-Equal World

International Women’s Day is a day of celebration that also recognizes the women who have come before, laid the groundwork and fought for the rights of all. Empowerment drives further empowerment – this is what International Women's Day (IWD) is all about. A challenged world is an alert world. Individually, we're all responsible for our own thoughts and actions - all day, every day. We can choose to challenge and call out gender bias, discrimination and stereotyping. We can choose to seek out and celebrate women's achievements. Collectively, we can create an inclusive and more gender-equal world.

From challenge comes change, so let's all #choosetochallenge

Join Fariha Róisín, Natalie Scenters-Zapico and Leila Chatti as they discuss and share some of their literary works that explore womanhood and ways to create an inclusive, and more gender-equal world.

Fariha Róisín is an Australian-Canadian writer, editor and podcaster based in Brooklyn.

With an interest in her Muslim identity, race, pop culture and film (as well as queerness and how that intersects with being a femme of color navigating a white world) she has written for Al Jazeera, The Guardian, Vice, Fusion, Village Voice, and others.

Previously, she has co-written a self-care column on The Hairpin, an astrology column for them, and was 1/4 of the writing team behind Samara’s TV series. She is currently the writer-at-large/culture editor for the new media company, The Juggernaut.

From 2012 onwards she co-hosted Two Brown Girls, a podcast that centered brown and black voices in film and TV, emphasizing the importance of representation. In 2016 she co-hosted a podcast for the Toronto Film Festival (TIFF) entitled Yo Adrian, which aired for one season. In 2017 she began writing, producing and hosting a new series with TIFF called How Do You Solve A Problem Like, with the first season focusing on the lack of Asian leads in Hollywood, airing in spring of 2019.

Fariha's debut poetry collection How To Cure A Ghost and a journal on femme/non-binary body empowerment, entitled The Body Positive were published by Abrams in Fall 2019. Her first novel, Like A Bird, was published in Fall 2020 (The Unnamed Press).

Natalie Scenters-Zapico is from the sister cities of El Paso, Texas, and Cd. Juárez, Chihuahua, México.

Her poems have appeared in a wide range of anthologies and literary magazines including Best American Poetry 2015, POETRY, Tin House and Kenyon Review. Currently, she holds fellowships from the Lannan Foundation and CantoMundo.

Leila Chatti was born in 1990 in Oakland, California. A Tunisian-American dual citizen, she has lived in the United States, Tunisia and Southern France. She is the author of the debut full-length collection Deluge (Copper Canyon Press, 2020) and the chapbooks Ebb (New-Generation African Poets) and Tunsiya/Amrikiya, the 2017 Editors’ Selection from Bull City Press.

She holds an M.F.A. from North Carolina State University, where she was awarded the Academy of American Poets Prize. She is the recipient of grants from the Barbara Deming Memorial Fund and the Helene Wurlitzer Foundation of New Mexico, and fellowships and scholarships from the Fine Arts Work Center in Provincetown, the Wisconsin Institute for Creative Writing, the Tin House Writers’ Workshop, The Frost Place Conference on Poetry, the Key West Literary Seminars, and Dickinson House.

In 2017, Chatti was shortlisted for the Brunel International African Poetry Prize. She currently serves as the consulting poetry editor at the Raleigh Review and lives in Cleveland, Ohio, where she is the inaugural Anisfield-Wolf Fellow in Writing and Publishing at Cleveland State University.

firelands, BEYOND THE DREAM, WomensHistory