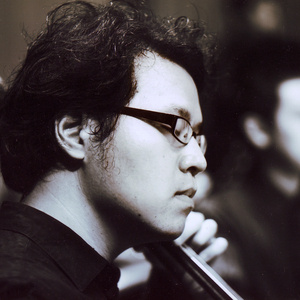 On September 24, we will be offering a guest artist recital with cellist Mingwei Zhao, '07, and Robert Satterlee, piano. This event is free and open to the public. Mingwei will also be soloing with the BG Philharmonia in their concert on September 22!

Mingwei Zhao comes from a musical family. He began to learn cello with his mother at the age of four. From 1997 to 2003, he studied at the music school affiliated with the Sichuan Conservatory, Chengdu, China. During that period, he participated twice in the Morning Side Music Bridge Summer Program in Calgary, Canada. In fall 2003, he began studies at Bowling Green State University. He has won numerous regional and state competitions, prizes, and awards. Graduating from BGSU in May 2007, he continued his studies with Professor Stumpf at the Thornton School of Music at USC with a full scholarship. In the summer of 2006, he was invited to join the Schleswig Holstein Musik Festival Orchester in Germany. He toured Switzerland, Amsterdam, Berlin, Hamburg and Luebeck. In January 2008, he began to play in a string quartet with Midori Goto. While at USC, Mingwei Zhao also played as the principal cellist in both symphony and chamber orchestras, and has collaborated with conductors such as M.T. Thomas, Hermuth Rilling and Carl St. Clair. After obtaining a master's degree and graduate certificate in 2011 with honors from USC, Mr. Zhao was invited to teach and play in the Sichuan Conservatory of Music in his hometown of Chengdu as the cello faculty and the principal cellist of the symphony orchestra. Since then, Zhao has performed all over the country as a soloist, chamber musician, and orchestra principal. In July 2014, after a successful and acclaimed series of master classes, private lessons and recital at the University of Xiamen, Fujian, he was offered the position of guest professor from the university, and became one of the youngest persons to ever receive such an honor. In the summers of 2015 and 2016, Zhao was invited to join the Ameropa Chamber Music Festival in Prague, Czech, and played in numerous renowned venues such as the Prague Castle and Santa Barbara Cathedral at Kutna Hora. In December 2016, Zhao successfully played Shostakovich's second cello concerto with SCCM orchestra at the West China premier. He was also invited to join the World Master Symphony Orchestra conducted by Eschenbach, an ensemble formed by musicians from the Berlin Philharmonic, Concergebouw, La Scala and Chicago Symphony. As a devoted chamber musician, Zhao has a piano trio and string quartet, which, for the past five years, has played concerts and recitals all over China.