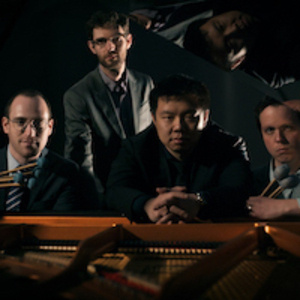 Music at the Forefront: icarus Quartet

Guest ensemble icarus Quartet, of which our piano faculty member Yevgeny Yontov is a member, will perform on Tuesday, September 8 at 8 p.m. in Bryan Recital Hall at the Moore Musical Arts Center as part of the Music at the Forefront concert series sponsored by the MidAmerican Center for Contemporary Music. The concert is free and open to the public.

BIOGRAPHY
Like the mythological figure from which it draws its name, the half piano, half percussion icarus Quartet dares to fly towards the sun, aspiring to new heights of artistry. Following their Carnegie Hall debut, composer Paul Lansky simply remarked, “This is music making of the highest order.”

While pursuing their graduate degrees at the Yale School of Music, the members of iQ were brought together to represent the school in its prestigious concert series, Yale in New York, with the Yale Percussion Group under the guidance of Robert van Sice. Composition chair Martin Bresnick regarded an appearance of the Quartet as “one of the best student performances of any work I have ever heard… They played with great energy, sensitivity and precision.” They have since performed throughout the Northeast in concert venues, as well as in universities and schools. In the 2017-18 season, icarus served as Ensemble-in-Residence for Music at St. David's in Baltimore, and was also featured on Yale's distinguished Horowitz Piano Series.

Passionate about educating and engaging with the next generation of musicians, iQ often works in school and university settings. They give classes and coachings on chamber music, as well as composition seminars on writing for their instruments. The icarus percussionists (icarus Duo) are in residence with Yale College, reading, workshopping, and premiering new student works.

Larry Weng, Yevgeny Yontov, Matt Keown, and Jeff Stern are all celebrated soloists in their own rights, and together they have found a special chemistry and inimitable joy playing chamber music. They are dedicated to the discovery, creation, and performance of new music, but what distinguishes their approach to contemporary music is a strong training and background in the classical genre. icarus Quartet is committed to performing new works with a studied and convincing interpretation that mirrors the validity of works with performance practices developed over centuries.