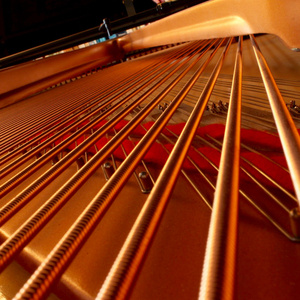 BGSU composition students will present their new works, performed by fellow music students. This event is free and open to the public.

Ginnungagap (GIN-oon-gah-GAHP) is the primordial abyss that preceded all things in Norse mythology. Another interpretation of the term is a magical, creative, and power-filled space. In the Norse creation story, this void is where the ice, rime, rain, and intense cold of Niflheim (NIF-uhl-heym), the ice world, clashed with the sparks, heat, and light of Muspelheim (MOO-spel-heym), the realm of fire. This void is also thought of as the place where the cosmos will collapse in on itself, during Ragnarok. This entire cycle is known as the “Twilight of the Gods,” and is where the universe will be reborn again in an endless cycle.
Most people are familiar with the story of Genesis, the first book of the Judeo-Christian Bible. The Earth had no shape, was empty, and deprived of light. The contrast between order and chaos is at the heart of society. These concepts of innangard (order) and utangard (chaos) are also a founding fabric of Norse mythology. Indeed, the ideas of law and order versus anarchy and discord are essential to our views of the internal and external universe. In a way, one could contrive that these contrasting concepts apply equally to life and death, among an infinite number of other disparities.
This piece attempts to tread the line between this dichotomy. It is impossible to completely walk this line, and in fact, I believe the only piece that can come close to this idea is John Cage’s 4’33”, or perhaps 0’00”. The presence of organized sound takes away the factor of utangard; however, as a citizen of innangard, I am forced to accept this design flaw. While composing this music, I made conscious decisions in the selection and corruption of source material, and although these decisions were planned, certain phenomena of the audio, especially the electronics, were unpredictable, especially the timing between the audio and bass. That is the quintessence of Ginnungagap.

Meditation is a work for snare and live-electronics composed in the Spring of 2019. The work utilizes a contact mic affixed to the head of the snare. The work was realized through Max/MSP and Logic Pro X.

On the Wind is inspired by the literal sound of wind, as it is heard rushing past our ears or faintly from within indoor spaces. It is also inspired by the things we come to know that are not immediately seen or understood – feelings of rising change, utterances of hope and resilience in a time of struggle, whispers of the things we wish we could see.

lullaby for the restless examines the mental process of falling asleep when sleep does not come easily. Tossing and turning, unable to reach a state of slumber, the weight of the world on its mind, the music itself must confront and resolve its internal conflicts before tensions are released and sleep becomes a welcome guest.

Petits Rats de l'Opéra was written in collaboration with my sister, a dancer, for an upcoming ballet competition. Abbie had the idea to choreograph a short dance based on Edgar Degas’ 1881 sculpture Little Girl Aged Fourteen, a statue modeled after a ballet student of the Paris Opera House. The ‘Little Opera Rats’ were often young women from impoverished working-class backgrounds, dancing to help support their families. Due to their social status, these girls rarely progressed very far in the ballet world, and were often preyed upon by older men with an opera house subscription, who were permitted to attend all rehearsals. Degas’ statue was met with scathing critique- its ugliness was shocking to the Parisian upper class, but the work is now viewed as a revealing portrait of the shortcomings of the Parisian society in the late 19th Century.
This piano miniature is a quick snippet of pure Romanticism, drawing upon multiple musical archetypes of Degas’ time. In true French fashion, the simple piano melody is decorated by extravagant ornaments, creating an impression of an over-the-top, incessant music box that shortly evolves into a whirlwind of Tchaikovsky-esque ballet music combined with Lisztian virtuosity.

Acoustic Emissions – Occurring upon the release of strain energy, acoustic emissions are the sounds produced from a metal object under strain. Algorithmically generated harmonies and rhythms invoke a sense of uncertainty and strain within the listener that are only resolved by the low groans and high pings characteristic of such emissions. One can hear the disjunct fracturing of both the ensemble's rhythmic structures and the imagined structural steel's integrity between various emission events, resulting in various waves of tension and release; strain and emission.