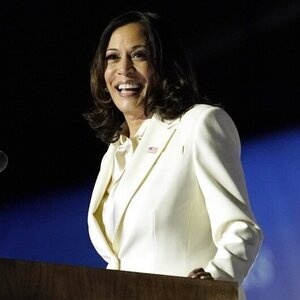 Being the First: But Making Sure You are Not the Last - Roundtable Discussion about the first female Vice President

Being the First: But Making Sure You are Not the Last

The nation recently welcomed Kamala Harris, our first woman and first woman of color, into the role of Vice President of the United States. The Center for Women & Gender Equity within the Division of Diversity and Belonging invites you to view “Being the First: But Making Sure You are Not the Last” – a brief roundtable discussion with Dr. Lisa Dubose, Dr. Kathleen Kollman, and Dr. Melissa Miller about the meaning and impact of having our first woman as Vice President. We’ll also discuss how to get women more involved in leadership at a local level and the importance of representation. You can view the recording here. On January 27th at 12:30pm, you can join Director of the Center for Women and Gender Equity, Dr. Kacee Ferrell Snyder, for a live discussion follow-up of the panel on Instagram @bgsu.cwge.

Dr. Kathleen Kollman completed her PhD in American Culture Studies at Bowling Green State University in 2020. She is currently serving as a Lecturer of English at the Ohio State University. Her research focuses on representations of gender in film, television, literature, and other popular culture texts. Dr. Kollman is working on turning her dissertation, “If She Were President: Fictional Representations of Female U.S. Presidents in Film, Television, and Literature,” into a monograph.

Dr. Lisa E. Dubose is a dually certified Human Resources Administrator (SHRM-SCP; SPHR), with nearly three decades of experience in public and private sector industries. She is currently employed as Director, Human Resources for Employee Relations and Professional Development at Bowling Green State University where she also earned her Ed.D in Leadership Studies. She has instructed as an adjunct at two universities, which include teaching for the past two summers, an accelerated master’s level Strategic Human Resources course for the Mendoza College of Business at The University of Notre Dame, in South Bend, Indiana.

Campus Activities, BEYOND THE DREAM, VirtualEngagement